The worldwide women’s network ZONTA is characterized by its commitment to improving the situation of women and its involvement in social projects. The ZONTA Club Bremen is now opening its network to young women who are not yet working, but are on their way and identify with the goals of ZONTA.

On Saturday, September 19, 2020 the ZONTA Club Bremen celebrated the official foundation of the Golden Z Club Bremen in a festive atmosphere in the Lidice Haus. “Golden Z Clubs give young women the opportunity to make a difference in the world together, to develop leadership qualities and to discover professional perspectives”, explains Ute Salmen, president of ZONTA Club Bremen, who is the godfather of the young women.

Initiator for the establishment of the Golden Z Club Bremen was Antonia Bagdonat, daughter of a Zontian of ZONTA Club Bremen. She acted as an actress in the benefit revue, which the ZONTA Club Bremen performed at the Shakespear Company on the occasion of the 100th anniversary of ZONTA International in February this year. “The club, the community, which achieves so much on a voluntary basis, has inspired me. I have therefore inquired about how ZONTA takes care of the advancement and concerns of especially younger women. Golden Z Clubs put their focus especially on the support of my generation” Antonia Bagdonat sums up her motivation for founding the Golden Z Club in Bremen. Founding members are eleven young women between 18 and 21 years of age. They are high-school graduates and students, daughters of Bremen Zontians, interested friends of the initiator and former winners and candidates of the Young Women in Public Affairs Award, which the ZONTA Club Bremen presents annually. 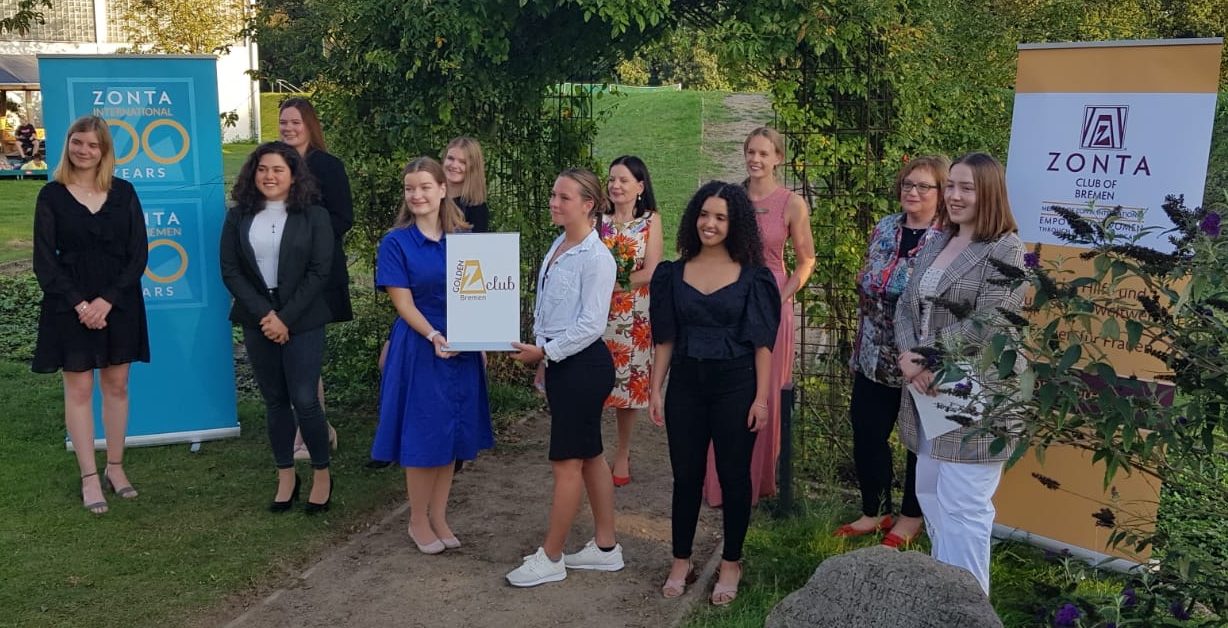 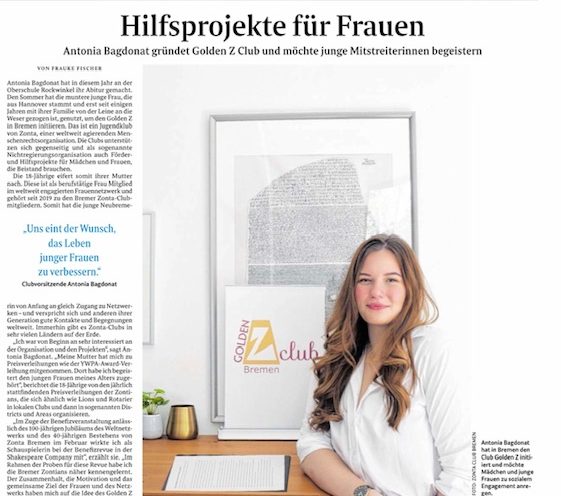 “We already have many ideas for future projects, but we plan to support the sponsoring club in particular in its projects. We can learn a lot from the members of the sponsoring club, for example, about networks, but we can also help especially in the area of digital communication. We would like to support young women and girls as Golden Z Club Bremen to go their individual way, independent of external conditions” Antonia Bagdonat describes the goals of the young women. Both the young women and the older generation in the ZONTA Club Bremen are looking forward to the mutual enrichment in cooperation.

Interested young women starting from 18 years, which would like themselves to engage in the golden Z club Bremen, can announce themselves with Antonia Bagdonat under golden-z-club@zonta-bremen.de.

ZONTA is a world-wide network of working women in responsible positions. Common goal is the improvement of the social and legal situation of women and the grant of assistance to self-help. ZONTA acts non-partisan, non-denominational and ideologically neutral. By women for women – locally, nationally, internationally. ZONTA International comprises more than 30,000 members with over 1,200 clubs in 63 countries. The ZONTA Club Bremen was founded in 1980. At present 48 women are active here. The club uses its income to support carefully selected, sustainable local and international projects. You can find further information at: zonta-bremen.de