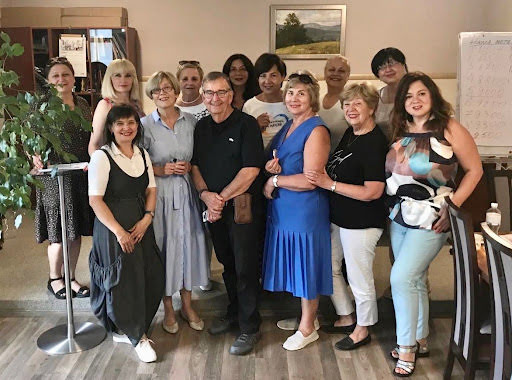 The war in Ukraine continues.

There is still no solution in sight that would guarantee the Ukrainians' right to self-determination over their country.

Ukrainians continue to fight and resist the invaders.

Without peace, our help is needed everywhere.

As Zontians, we focus on helping our three clubs in western Ukraine. There are two in Lviv, near the Polish border and one in Uzhhorod, near the Slovakian and Hungarian borders.

Our Ukrainian members were overwhelmed by the friendship and helpfulness of the Zontians at the convention in Hamburg.

We would like to express our gratitude for the invitation to the convention.

It was accompanied by the generosity of the Hamburg Zontians who opened their homes for "Open House" and much more.

We were especially touched by the fact that the Luxembourg clubs invited the Ukrainian women to the gala evening, but also by the many gestures and expressions of friendship by Zontians from Japan and other regions of the world.

The convention was for all Ukrainian women a nice break from the war, the bomb terror, the daily alarms and the hardship in their homeland.

Read more about the projects of the 3 Ukrainian clubs here